HomeTPMS Information What is TPMS?

What are Winter Tyres? 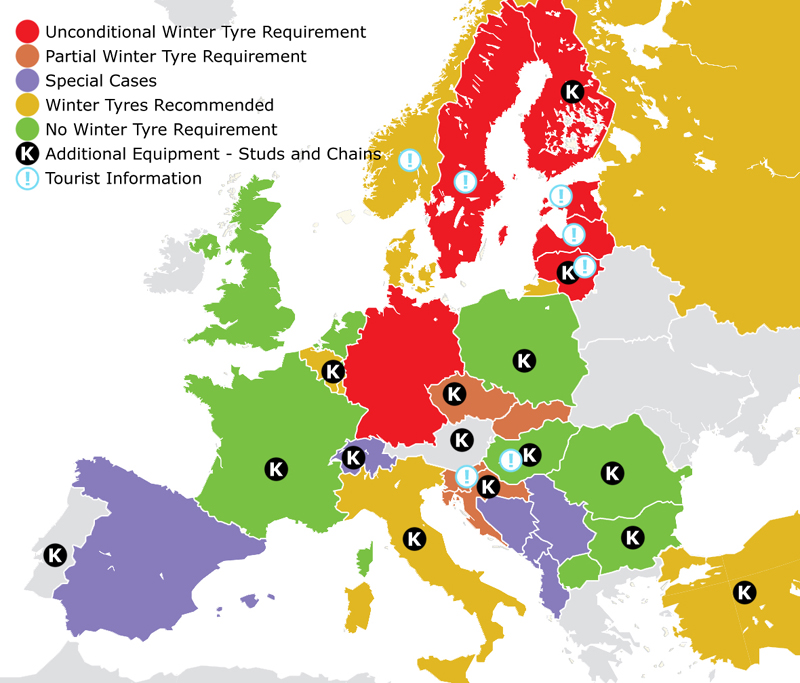 In many countries there is a duty or law to use Winter Tyres at certain times or road condition which could be ice, snow mud or smoothness.

Winter Tyres are used during wintery road conditions and lower temperatures. They have a rubber compound which is elastic at low temperatures to achieve sufficient gearing and transmission with the road surface.

Winter Tyres are always marked with the M+S Symbol (Mud and Snow). The EU regulation nr.661/2009 dated 13th July 2009 declares, M+S marked tyres which above all, have a tread profile, tread compound and constitution in order to achieve better driving and traction qualities on snow.

Another symbol for winter tyres contains a mountain and a snowflake (Alpine Symbol) and is awarded from the American Road Service NHTSA.

Unlike summer tyres, winter tyres in addition to their normal profile, have slats which make it possible to get a gearing on icy, snowlike road conditions.

Different tests have shown that even when travelling at the low speed, a winter tyre can stop up to 11 meters shorter on icy roads than a normal tyre at wintry weather condition below 7°C.

What is Winter TPMS?

A Tyre Pressure Monitoring System or TPMS is an electronic system for monitoring the air pressure in a vehicle tyre and automatically transmitting a warning to the driver in the event of an under or over inflated tyre.

The majority of systems use direct tyre sensors which transmit real time tyre pressure information to the driver of the vehicle either via a dashboard display or a warning light. The sensors are physical pressure transducers which are attached to the back of the valve stem. The sensors are manufactured by International companies such as Schrader, Siemens, TRW, Pacific, Lear and others. There is no common technical standard for the sensors and the OE's and suppliers have generated a multitude of sensor designs.

The sensors also transmit data such as their unique sensor ID, temperature and pressure, battery life and other diagnostic information. This data is sent to the Engine Control Unit (ECU) or specific receiver on the vehicle. Those vehicles which have graphical displays of the TPMS positions can then show on which wheel there is a problem.

New cars will be equipped with sensors integrated in the valve. These transmit their own ID number together with information about tyre pressure and temperature and other information via high frequency to the vehicle ECU so that the driver can be warned of critical values through a warning light.

Every time a TPMS sensor is replaced, the vehicle ECU has to be reprogrammed and the unique ID and position of each sensor must be entered into the vehicle. This needs to be done in the case of a faulty sensor/valve or low sensor battery.

When working with winter tyres and where the procedure has to be repeated 4 times (and every time when changing from summer to winter tyres and the other way around), the amount of work is considerable. But not only that: Since car and tyre manufacturers use a multitude of different sensors, a tyre workshop offering TPMS repairs has to stock every single sensor type.

In order to tackle this problem, universal sensors are used to generate a set of Winter Tyres to swap on/off the vehicle. At the start of Winter Tyre season, the Winter Tyre set can be readied by fitting them with universal sensors. They can then be relearned/programmed to the vehicle using a Bartec tool. The TPMS repair time is reduced to a minimum which is essential during this process. In the USA, where TPMS have been mandatory since 2008, the Schrader EZ-sensor® was introduced in 2012 and is capable of replacing over 90% of the roughly 150 different OEM sensors there. A similar market coverage is anticipated for Europe as well. Workshops can therefore reduce their stock drastically and still offer TPMS repairs. In addition, other market leading sensors are available for the aftermarket TPM Sensor demand including: OE Sensors, ALLIGATOR sens.it™, and Huf IntelliSens™.